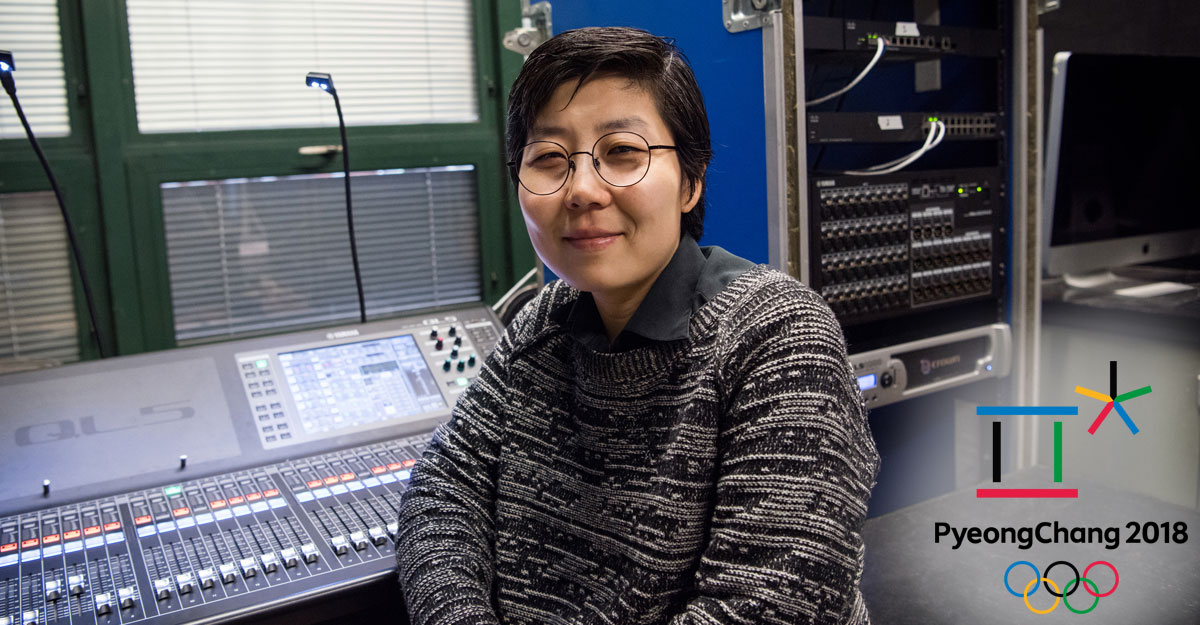 In less than a month, the world’s greatest athletes will come together to compete in the 23rd Olympic Winter Games in PyeongChang, South Korea. As is tradition, the events begin with a huge production at the opening ceremonies featuring music and performances native to the host country along with athlete introductions. When we tune in to watch the opening and closing ceremonies, we’ll be listening to SUNY talent as the show goes on.

Sun Hee Kil, assistant professor in the Department of Theatre Arts at SUNY New Paltz, will serve as assistant sound designer for the opening and closing ceremonies at the 2018 Winter Olympic Games in PyeongChang, South Korea.

For Kil it will be a return to the nation where her career as a sound designer and audio engineer began. She started working on sound for musical theatre in 2001, and in 2006 she came to the United States for further schooling and to pursue opportunities to work on different kinds of theatre performances.

Kil joined the faculty of SUNY New Paltz in 2014 to share her deep knowledge and experience with students of stagecraft, but has continued taking design and direction jobs both regionally and internationally.

“Last summer I had two gigs in South Korea – I still maintain my work there – and I found out that the sound director of the opening and closing ceremony at the Olympics was my ex-boss,” Kil said, referring to Do Kyung Kwon, who Kil calls a mentor and “the best musical sound engineer in South Korea.”

“I realized this would be way bigger than any productions I had worked on before, and it was an opportunity I could not pass up,” she said.

While Kil cannot reveal any details about the content of the ceremonies, she said she’s expecting this to be among the most complex and challenging jobs she’s ever been part of.

If recent years’ ceremonies in Rio de Janeiro, London, Beijing, Sochi and Vancouver are any indication, the event will likely involve hundreds or thousands of performers, multiple sets and precise timing over an hours-long program.

“My job is making sure that all the communications are working correctly, and that everyone is in sync, so that we can make sure the athletes walk in at the right time, with the right music and the right microphones being heard,” she said.

“Everything needs to be planned in real time. In musicals, if an accident happens and one automation doesn’t work, we can cover it and fix it with a longer scene change or something. But for the Olympics, everything has to match perfectly.

“It’s different too, because of the broadcasting. I’m used to working on musicals that are closed performances. All the timing is relative to the internal audience. But for this project I have to think about the audience inside the stadium, and also the TV audience and the broadcast team.”

This attention to detail is a point of emphasis for Kil’s work with students at New Paltz. In addition to teaching courses in sound design, she often assists and supervises student audio engineers for the four Mainstage Productions performances put on by the Department of Theatre Arts each year.

“Our classes involve a lot of hands-on learning,” Kil said. “We have a designer and an assistant engineer programming the board, and I’m here to answer questions. Our goal is to give them an example of how to work to a professional standard.”

While Kil looks forward to resuming that work at the College, for now she’s focused on getting ready for the Games.

“I’m working in the biggest gig I could get from one country, maybe anywhere in the world,” she said. “My motherland called me, and I’m really happy to serve my country. I feel the responsibility and want to do my best, as one world citizen, to put on an enjoyable show for everyone.”

The PyeongChang 2018 opening ceremony will be held on Feb. 9, and the closing ceremony on Feb. 25.

(This piece originally ran in the New Paltz News)

In addition to professor Sun Hee Kil, SUNY will be represented in more ways at the Winter Olympics in PyeongChang.

Empire State College alum Erin Hamlin is making her fourth trip to the WInter Olympics. The star luge athlete made history in the 2014 Sochi games when she became the first U.S. singles luger ever to win a medal in Olympic competition, earning bronze in the women’s singles luge event. In addition to her bronze medal, Erin has won a number of World Championship and World Cup medals.

Joining Erin once again will be alumnus Ashley Caldwell. The freestyle skiing star will be making her third trip to the Winter Olympics. Her performance in 2017 is showing positive signs for these Winter Games. In October, Ashley finished in first place in the World Ski Championships Ladies’ Aerials in Sierra Nevada, Spain.

SUNY Plattsburgh has two former athletes going to South Korea to represent team USA. Former track and field athlete John Daly has been named to the 2018 U.S. Olympic Skeleton Team. It will be the third Olympic games for John. Joining him on the skeleton team will be former student Matt Antoine.

Taras Kufel is the Manager of Digital Engagement at the State University of New York.

Football at SUNY is Postseason and Bowl Game Bound

Focusing on Perseverance and Winning In a Different Way

Mascot Madness Champion, Hugo the Hawk, Speaks on His Victory and Getting Back to Work 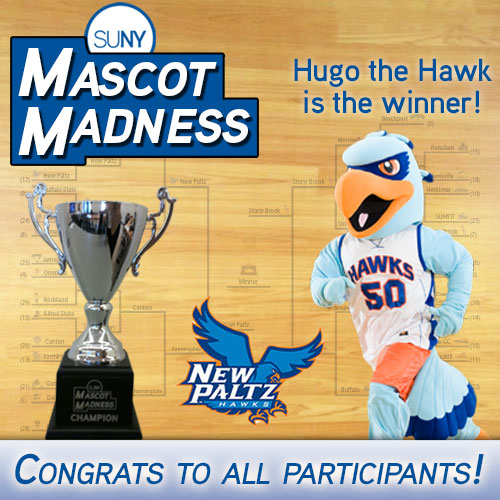 The first ever SUNY Mascot Madness came to a close yesterday with over 300,000 votes cast over the entire competition.  In a race that was too close to call initially, Hugo the Hawk from New Paltz was declared the winner of the first SUNY Mascot Madness over Wolfie the Seawolf from Stony Brook.  In a race to the finish, he met the library dean, cleaned the campus, and hung out with many students on campus.

We were able to catch up with Hugo and get his thoughts on the final round of the competition.

What responsibilities do you carry as SUNY Mascot Madness 2013 Champion?  What’s next for you?

As the SUNY Mascot Madness 2013 Champion, it is my duty to represent all that this title stands for. I will continue being the best mascot I can possibly be and keep getting better at it each day.

What will you do with all of your free time once SUNY Mascot Madness 2013 is complete?

With this free time I will get back to the basics. I will work on my cheers and dances and keep myself in tip-top shape for all the teams I root for. I will work hard to earn my place in next year’s tournament and make sure I do my best to defend my crown.

And we look forward to next year’s competition with you Hugo! 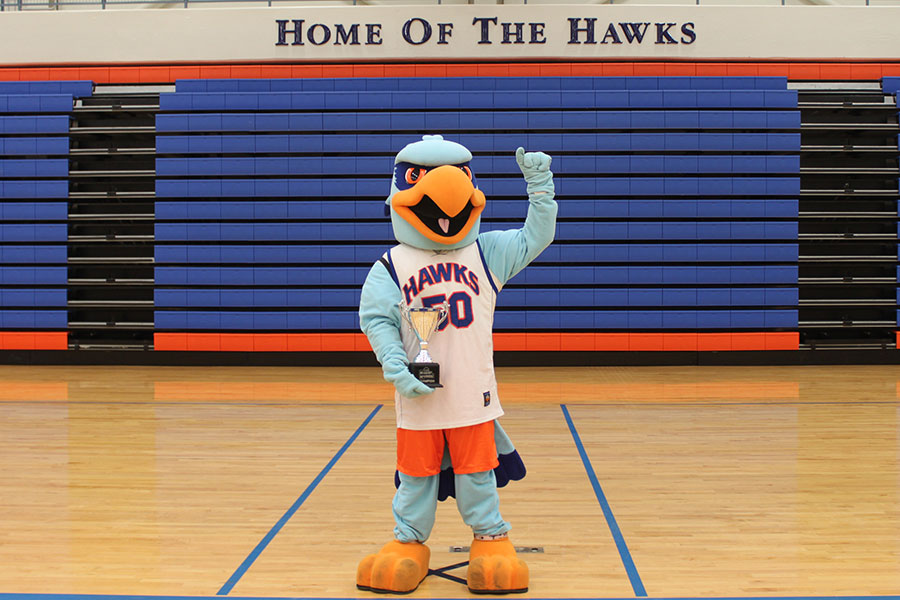 Emily Schwartz is the Coordinator of Open SUNY Communication and Projects. 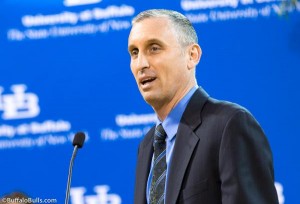 Bobby Hurley has been named the 12th head men’s basketball coach at the University at Buffalo.

Bobby Hurley, one of the most iconic figures in college basketball history, has been named the 12th head men’s basketball coach at the University at Buffalo.

He joins UB from the University of Rhode Island, where he has been serving as associate head coach. He was hired as an assistant coach at Wagner College in 2010, and spent two seasons with the Seahawks, playing a critical role in rebuilding the men’s basketball team. He helped lead Wagner to a 25-6 record during the 2011-12 season – its best record in school history – before joining Rhode Island.

A first-team All-American in 1993, Hurley is best remembered for being the point guard at Duke. Hurley helped lead the Blue Devils to three Final Four appearances and consecutive national championships in 1991 and 1992. Hurley still holds the NCAA record for career assists with 1,076.

Following his outstanding career at Duke, Hurley was selected by the Sacramento Kings with the seventh pick in the 1993 NBA Draft. He went on to play five years in the NBA with the Kings and Vancouver Grizzlies. 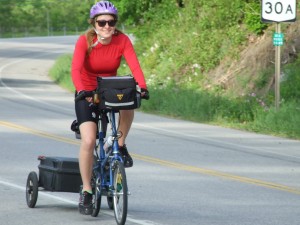 Jami Haynes sets off from her home in Central Bridge, NY, on Tuesday, May 28.

SUNY Oneonta senior Jami Haynes set off on a 4,200-mile, cross-country bike adventure today with the goal of raising awareness about the Harvest of Hope Foundation, an organization that provides emergency assistance to migrant workers and their families. Haynes, 21, accompanied by her boyfriend and sister, left early Tuesday morning from her home in Central Bridge, N.Y.

An avid runner and hiker, Haynes got the idea for the “Miles for Migrants” bike tour after Harvest of Hope founder and President Phil Kellerman visited one of her education classes, taught by Madeline Berry, this past semester. Her 20-year-old sister, Jena, signed on for the adventure, and then her boyfriend, Caleb Grippin, 23, joined the team. 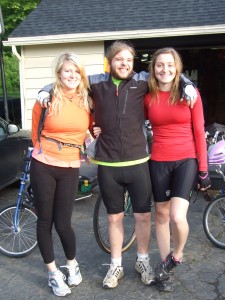 “I wasn’t very familiar with what a migrant farm worker was and how they contributed to American society, and I was especially touched as a future educator by the support that Harvest of Hope gives to these families and the scholarships that the foundation provides,” Haynes said.

The class did a service-learning project to benefit Harvest of Hope, and Haynes kept the momentum going. She and her sister organized a spaghetti supper, several bake sales and a raffle, as well as giving presentations about Harvest of Hope on campus and in the community. “Spreading awareness of the foundation and how it helps migrant farm workers has been extremely rewarding,” Haynes said. “The community definitely knows a lot more about the contributions of migrant workers because of this project.”

Haynes hopes to continue raising awareness by meeting with media outlets during her journey. The trio plans to ride about 60 to 80 miles per day, camping and staying with friends and family members en route to San Francisco. They have been training for the trip for about three months, logging several hundred miles of short and long rides.

The Harvest of Hope Foundation was established in 1997, when Kellerman worked at ESCORT, a migrant education resource center based at SUNY Oneonta. In addition to its affiliation with ESCORT, SUNY Oneonta has operated a College Assistance Migrant Program (CAMP) since 2001. Created in 1972, CAMP is a federally-funded scholarship program that helps students from migrant and seasonal farm-working families pursue higher education.

ESCORT senior programmer analyst Bob Thomas, a friend of Kellerman’s, loaned Haynes and her crew three touring bikes and trailers. Thomas, who completed a cross-country bicycling trip himself back in 1976, was on hand for the send-off Tuesday, offering last-minute tips and advice.

An elementary education major with a concentration in social studies, Haynes will share experiences from her trip this fall as a student teacher at Cobleskill Elementary School.

She will also chronicle her adventures throughout the 11-week journey on the blog: www.crazyguyonabike.com/sistahbikers.